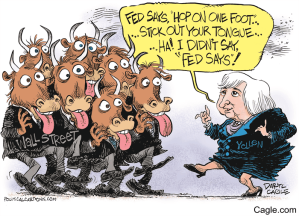 Martin Feldstein, Professor of Economics at Harvard University writes in a recent article about the rationale behind the Federal Reserve Bank monetary policy decision, focusing upon the relationship between China & America.

There is more to the decision to leave interest rates on hold for the time being. Read through the recent speech by Janet Yellen at the Philip Gamble Memorial Lecture, University of Massachusetts, Amherst, Amhearst, Massachusetts. Can you see the error in this page ? I hope that the Federal Reserve Bank of America spends more time in checking their data and decision making process than it does in proof reading official media articles/reports.

My guesstimate is that the Federal Reserve Bank decision will be to leave rates alone. There are only two ways it will move in Q4 with monetary policy and that is by an increase of 25bp or to leave well alone. The global economic fragility plays a part in the decision making process and not just inflation & employment. If the Fed moves rates in Q4 and there is a negative reaction down the line in Q1 it will not be until Q2 at the earliest that a reversal will be made. Considering the stall warning signs looming on the horizon, I doubt that the Fed will lift rates in Q4 even though they have been threatening this move in recent months.

I am not an economist nor an economic annalist and may just be incorrect with my idea of a delay in the normalisation of rates. I am skeptical about Yellen’s ability to effectively steer the ship considering that Bernanke & Greenspan were swamped on several occasions by stormy seas and we were all left trying to stay afloat in troubled waters. Inflation dynamics are a real concern. In respect to this I say better the devil you know than do not know and when it comes to monetary policy, beware of the wolf in sheep clothing.